Mörrum: Between Fish and Fishermen

Our adh-season-licence has been fished a lot this year and we spent a few days as well looking for some salmon action. One trip started early september when the weather was still warm and the water was really low. Not the ultimate salmon conditions, but if you look at the Mörrum statistics there are always good numbers of fish caught. So no doubt we were on fire to fish this famous river in the southern part of sweden ;-)
Arriving after a solid eight hour journey our anticipation got kind of damped within one glance at Pool 17 which we crossed on a bridge. The nice flowing salmon river was totally overcrowded! It turned out as one of the busiest spots where lines are drifting literally 24/7. It isn’t uncommon to fish spots like in a „rotation“ which means you fish it several times in a row (waiting in between until it’s your turn). As this style isn’t anyones business we all agreed to go for pools with less fishing pressure.
The property of the Kronlaxfiske covers lots of kilometers to fish. Both wild running stretches and almost stillwater parts can be found mapping the trace of the Mörrum. It is often covered by idyllic forests and if you escape the main pools it gets less travelled. Good runs can be found throughout the beats and salmon are widely spreaded at this time of the year. So we decided to  wade the river downstream where paths don’t follow and it was worth it. Three out of four salmon that have been landed came out of pools you couldn’t see walking the main path. Maybe because these stretches don’t see that many fly fishers? Probably, but with salmon you never know…At least we won’t skip these spots in future.
The most memorable highlight of our trip was Micheals very first salmon (Hybrid) that had to be earned in many ways. Several unresponded takes, a salmon lost close to be landed and an unwanted bath wore hard on him. Not to be mention that the relief was more than visible when steffen landed the well conditioned hen – salmon fishing at it’s best!

Would you like to fish the Mörrum as well? There will be a Mörrum Promotion for Season 2016 and you have the possibility to fish with the adh-season-licence for free! 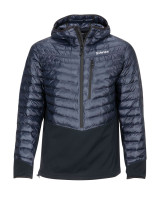